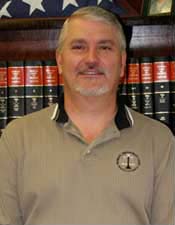 Elected 2001-2004 & 2004-2008
Welcome to Echols County Georgia
Since elected in 2001 I have attained over 260 hours in Probate law classes and over 280 hours in Magistrate law classes threw University of Georgia and the Council of Probate & Magistrate Judges. I have also attended over 210 hours of traffic court classes and wrote the first Traffic Bench Book for Probate Judges in the State of Georgia. I have also attended over 140 hours of election classes.

I received the President’s exemplary service award for the year of 2004-2005 from the Probate Judges Council for creating the first Traffic Bench book for Probate Judges.

I was the first Judge in Echols County to install a program to put all Probate and Magistrate cases on a computerizes system to better track all cases and to have a better paper trail for audits and a quick and fast way to look up cases and records.

I have served on the Echols County Booster club for 6 years and been vice president for 3 years.

I have served on the Lake Park Chambers of Commerce for 7 years and served as vice president and president for the year 2007-2009.

I am also the Election Superintend for Echols County.