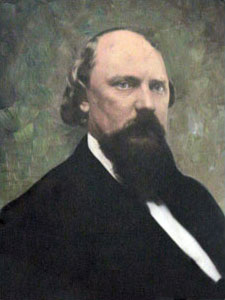 Echols County was created from Clinch and Lowndes counties on Dec. 13, 1858 by an act of the General Assembly. Georgia’s 132nd county was named for Brig. Gen. Robert Echols (1798-1847), a United States officer. He served in the United States Army during the Mexican War as Colonel and commander of the 13th United States Regular Infantry, and was killed in action during the at the Battle of National Bridge. Before the war he had served in the Georgia State House of Representatives from 1824 to 1829 and in the Georgia State Senate from 1830 to 1844. Oringially buried on the field in Mexico, his remains were returned to his native Georgia.

The 1858 act creating Echols County named Harris Tomlinson, Guilford Register, and William B. Cruise as commissioners with authority to select the site and purchase land for location of the countyRentz Familyseat. The legislation further provided that voters of the county assemble at the town of Troublesomeon the first Monday in April 1859 and elect county officials. If, by the time of the election, the commissioners had not selected a county seat, the newly elected justices of the inferior court would be empowered to select the county seat.In 1859, either the commissioners or the inferior court designated Statenville as county seat. The settlement had been named for the community’s first storeowner, Capt. James Staten. The General Assembly incorporated Statenville by an act of Dec. 13, 1859. (Unfortunately, the act incorrectly identified the new town as “Statesville” rather than “Statenville” — a mistake that has never been corrected. Nevertheless, highway maps and local residents identify the town as “Statenville.”)

In 1958, the General Assembly approved a local act redrawing the boundaries of Statenville. According to the legislation, the town’s new boundaries consisted of the Echols County courthouse square — meaning that the city had no official population. In 1965, the legislature approved a local act giving Statenville a new city charter (and one that spelled its name correctly). The legislation required approval in a referendum, but Statenville voters turned down the new charter.

By the early 1990s, Statenville was one of over 100 official towns that provided few if any services toTown of Mayday their citizens. Some of these towns had long been inactive– but legally they retained the status of an incorporated municipality. In an effort to deal with this problem, the General Assembly enacted legislation mandating that any incorporated city in Georgia must provide its citizens with at least three municipal services or lose its charter. Though given a grace period to comply, over 100 small or inactive towns — including Statenville — lost their municipal charters on July 1, 1995. At that point, they became unincorporated communities under the jurisdiction of their county governments. Today, Echols, Columbia, and Crawford are the only Georgia counties with an unincorporated community serving as county seat. The County Courthouse was destroyed by fire in 1897 destroying all records.